The Valley Farmers’ Conference, under the aegis of the Valley Farmers’ Center and the Newe Ya‘ar Research Center, held on December 31, 2019.
The Conference focused on testing and development of Moringa oleifera Lam., the horseradish tree, as a new crop plant in Israel.

There are a few moringa growers presently in Israel, most of whom grow the plant as a food crop and as a raw material for dietary supplements and cosmetics. At Newe Ya‘ar, Moringa oleifera has been grown for three years, as nutrient feed for ruminants. The large and diverse knowledge acquired over time at Newe Ya‘ar and at the Volcani Center are the basis for the belief that moringa is a promising new crop plant, both agriculturally and economically, and that it is worthwhile to encourage its introduction as part of a slew of options for Israeli agriculture.

The opening presentation of the conference was contributed by Gil Saggi, an educator and agricultural advisor, from the qibbuz ‘En HaShofet of the Menashe Highlands.

This presentation included an overview of Moringa oleifera, its botany and systematics. Over the course of his lecture, Gil discussed the worldwide distribution of moringa as a crop and where it has been grown in Israel. He also surveyed the nutritional components of the plant, its vitamins, minerals, amino acids, anti-oxidants, and anti-inflammatory compounds. He also compared it quantitatively with various other foods.

Dr. Yiftach Vaknin, a research scientist in the Department of Natural Resources, Institute of Plant Sciences at the Volcani Center who has studied moringa over the past 15 years, followed with a lecture entitled “The potential of the moringa tree as a crop for oil production and the health-related properties of the plant”.

In his lecture, he surveyed the many uses of the moringa plant: (1) as food, all parts of the plant, including leaves, roots, flowers, and seeds, are edible, (2) for cosmetics, as the oil in its seeds is considered a high-value, premium product because of its health-related properties, and (3) for production of nutritional supplements. From a health standpoint, moringa is considered to have special virtues and has been the subject of research in recent years, even in paraclinical trials with human subjects. Health-related research with moringa has been directed toward a wide variety of maladies, including cancer, diabetes, epilepsy, metabolic syndrome, and high blood pressure.

Itay Shulner, a Master’s student under the guidance of Drs. Ran Lati, Zvi Peleg, Miri Cohen-Zinder, and Ariel Shabtay, presented the results of his research.

His goal was to test the safety and efficiency of chemical and non-chemical pest control measures and develop agricultural management practices of integrated weed control for multiple-harvested moringa. For this purpose, he ran a number of field experiments to test response of moringa to application of herbicides having various mechanisms of action. Also, in an experiment conducted without a chemical component, he tested the application of a mechanical finger cultivator between and within rows, with varying numbers of applications from seeding to first harvest. The results showed the potential use of various methodologies in a safe and efficient way, based on scientific know-how, in developing integrated pest management for multiple-harvested moringa.

Dr. Zohar Ben-Simhon, manager of agricultural field production and experimentation at Newe Ya‘ar, presented a protocol for growing moringa as a forage crop for ruminants.

Under this methodology, moringa seeds are planted in closely spaced furrows. The plants are harvested with a commercial combine every one-and-a-half to two months, with four harvests per year. All stages of the crop were presented, starting with judicious choosing of a suitable area for the crop, preparing the soil for sowing and the sowing itself, through plant protection from weeds and pests, irrigation, and harvest. This protocol for the crop is based on three years of experimentation at Newe Ya‘ar (in the Yizre‘el Valley). Most importantly, now, is the need to check the applicability of these results to other parts of Israel and to various soil types.

The closing presentation of the Conference was contributed by Dr. Miri Cohen-Zinder of the Department of Ruminant Science, Institute of Animal Sciences, Beef Cattle Section at Newe Ya‘ar.

Miri reviewed the research of the Section, spanning more than a decade, on the potential use of moringa as a forage crop to supplement the diet of ruminants. Generally, it was apparent that moringa silage has a positive effect on measures of productivity (for example, meat production or milk and milk solids production) on one hand, and quality of the product and its health profile (meat or milk) on the other.

Conference on soil supplements: A look at the latest practices in the service of sustainable agriculture

Why have a seminar day on the topic of soil supplements? Dr. Shiri Freilich, A.R.O. Institute of Plant Sciences, Newe Ya‘arOrganic supplements derived from various 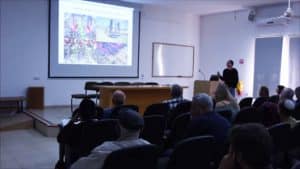 The Valley Farmers Conference, jointly sponsored by the Valley Agricultural Center and the Newe Ya‘ar Research Center, was held on 4 December 18 at Newe 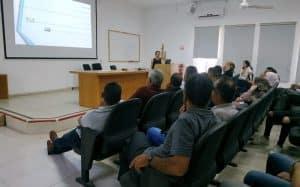 On June 19, 2019, a conference on promoting sustainable agriculture was held at the Newe Ya‘ar Research Center. The conference was sponsored by the Model