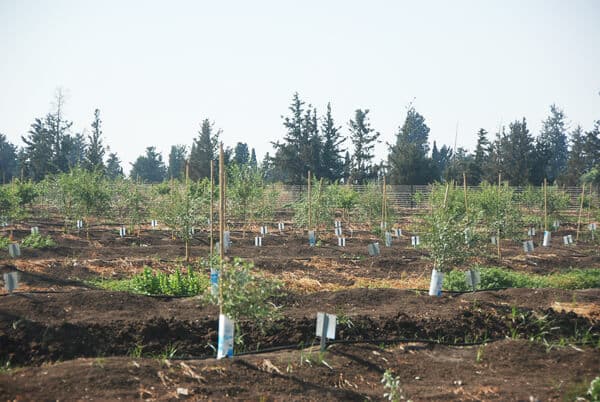 The orchard of the Model Farm is devoted to almonds and consists of three plots that share an emphasis on environmental friendly agriculture as related to almond growing. One plot focuses on weed control, another on natural resistance to an economically important pest, and another on resistance to high temperature and drought.

Weed control will be researched using a plot that consists of 1.5 hectares of ‘Mattan’, a self-compatible almond bred at Newe Ya‘ar that produces high-quality, large and tasty kernels. The experiment is aimed to evaluate four weed control methods applied on the beds, from the base of the trunk to 1.2 m from each side of the trees: flaming, cultivating, cover crops, and the control being the standard commercial use of herbicides. Between the beds, cover crops were sown as the sole weed-control tactic.

Pest resistance will focus on the almond fruit wasp, which causes heavy economic losses to almond growers. Control of this pest requires chemical spray applications that are detrimental to the environment and human health. In research already conducted, we identified a number of cultivars in the collection at Newe Ya‘ar that possess partial but effective resistance to the almond fruit wasp. In this plot, we will be testing the progeny of crosses made between the resistant cultivars and the horticulturally superior but susceptible cultivars. We will attempt to discover the mode of inheritance of resistance as well as select genotypes that will be both, resistant to the wasp and horticulturally superior.

High temperature and drought resistance efforts will closely examine a rare heirloom almond cultivar which can survive unusually warm, dry years. In this plot, we are attempting to determine whether the resistance of this genotype can be crossed into horticulturally superior cultivars for the purpose of extending the range of successful almond production to warmer and drier, even desert conditions.

Topics are explored in the field

Activity in the field